but enough about me

I wanted to toot someone else's horn for a change.  Someone who also does a little dreaming in their spare time, and whose creations deserve more recognition.  After several Blackle searches, I came across this YouTube video, featuring art work by Lucy Romero.

Lucy's colors are as bold as her designs.  Her pieces could be illustrations from a Day of the Dead inspired graphic novel.  I don't know how to talk about art.  I just know her blue-skinned creature in Por Vida has a haunting yet peaceful look with her shimmering green eyes and blood-red, full-lipped pout.  I imagine her as a fairy godmother character.

My favorite, though, is Blank Sugars, which shows the profile of a young woman.  I see her as the heroine, innocent and naive, with sugar beaded lips.  The sweetness of the roses that surround her is laced through her hair in pink, flowing ribbons.  The dark patterning around her eye is like a mask.  Lifting the mask would reveal to her the truths of the world, and that's where the story begins...

I found Lucy on FaceBook and sent her a message asking her about her artwork.  She is incredibly open and friendly, and I instantly liked her.  After e-mailing back and forth with her, here is what I learned:

She has been an artist as long as she can remember, at first drawing, and beginning at age 17, painting.  She was first 'discovered' by Keith "K Dub" Williams, who happened to see one of her paintings as she walked past his classroom at Oakland High School.  He included her work in an exhibit entitled "Cool Remixed" at the Oakland Museum, as well as in "The Most Known Unknown" exhibit at the Oakland Airport. 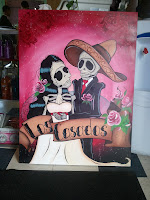 Lucy candidly admits that her motivation for painting at first was primarily to "show off,"but she soon developed a passion for it.  In describing what inspires her, Lucy wrote, "I get all my ideas from different places, mainly my Mexican heritage. I love Halloween, tattoos, Dia de los Muertos, Sugar skulls, eyes, clowns, masks, anything that has to do with decorating, painting, and piercing the body.  Most of the time when I get to sketching a piece those things cross my mind a lot."

Lucy has been a licensed cosmetologist for 3 years and does nails and hair at Mariely Beauty Salon (where more of her art is on display) in Oakland at 46th and International.  Some of her artwork can be purchased at Who's Your Betty? Boutique in Oakland, as well as on her FaceBook page and her Instagram page.

Posted by Unknown at 6:41 PM No comments:

Three Christmases ago I sat in my parents' front room with my mom, dad, and younger sister.  I was in my favorite chair, an old wooden wingback upholstered in a scratchy brown material.  My stomach was full of Christmas roast.  The walls, the mantle cluttered with colored lights, Christmas cards, and candlesticks, the vaulted ceiling were like a second skin, comforting and draping easily around me.

Dad was telling stories about his father and grandparents.  Bertha McClellan and Rudolph LaFleur never should have married in the first place, if their families had anything to say about it.  Scottish Canadian and French Canadian weren't supposed to mix, but they did, and started a family in Butte, Montana.

Bertha was a furrier, while Rudolph worked in the copper mines and was a paid organizer for the Industrial Workers of the World.  The family eventually moved to California, where Rudolph worked as a plumbing contractor and built houses that Bertha designed.  The stories my dad told about them and their four sons were not the happily ever after kind.  Bertha became ill with cancer.  Rudolph became sick as well, most likely as a result of his work in the mines.  I remember my dad saying that by the time his father was 18, he was an orphan.

Reluctant to disentangle ourselves from the gentle web of family and home, my sister and I listened to story after story of sticking it out, and sticking together as a family.  I was inspired by the independence and ingenuity of my great-grandmother, and by the relentless hard work of my great-grandfather.  I had recently decided to start my own publishing company and self-publish my first book.  After all, if Great-grandma Bertha could create houses, what was stopping me from putting my books into print?  Wanting to pay tribute to a part of my past, I chose the name Storymine Press.  Instead of copper, I would mine stories, and if I keep on listening to my dad (which he claims I never do), I just might hit the motherlode.
Posted by Unknown at 7:56 PM No comments: